Long before I started blogging I was an avid fan of the wonderful Strawberry Singh which means for over two years now I have been reading her blog and have always been amazed by the number of people who participate in her challenges.  Though I have planned on taking on a challenge or two or ten since I started, part of me has been hesitant, and it's probably the shy side of me, yes I have one!  But for my own resolutions this year I decided I need to be more social and more approachable than I have been in the past few years, which means the first thing I did was head over to Strawberry Singh's site to see what thoughts she had into the new year and to see if there were any challenges being put out to us all in the SL community.  The article from January 2, 2016 put forth a few challenges/resolutions and I was particularly interested in the second.  "Try a mesh head and wear it for at least 24 hours – Some of you have already converted over to mesh heads and have become loyal to them. But there are still a lot of you that are strongly against them. I thought it would be interesting to get you guys to open up a bit and try it out."  Well, as most of my close friends know I have not been a fan of the mesh heads, at all.  Having come over from another 3D site I came to Second Life to be different, to look different, and the last thing I wanted was to go back to just being another face in the crowd.  I have been more than a tad bit resistant, even as more and more heads have been released, as well as oodles of appliers from my favorite skin designers.  Since I had already decided part of 2016 was going to be about stepping out of my comfort zone, I decided to take the mesh head challenge and see what all the fuss was about.  Off I went picking up 20+ different heads from across the grid, as well as several appliers and headed up to my platform to do a little research. 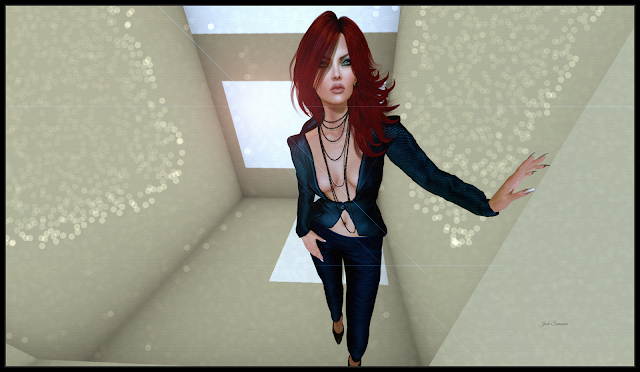 I have to say, I was stunned to discover that 99% of the mesh heads I tried on had to be worn with eyes by the same creator and did not fit IKON's mesh eyes.  Which, for me is truly heart breaking, but made my choice in heads a lot easier!  I literally have over 75 pairs of eyes from IKON and I hate the idea of not being able to use what I think are the most amazing eyes on the grid.  That being said, if you too are a fan of IKON, then know LeLutka heads will always fit your gorgeous peepers!  This seriously narrowed my search and in the end I fell absolutely in love with the last release of 2015, the premier of the V 1.4, Simone.  Check out the blog to see all the goodies released for Simone which should make everyone excited for the upcoming releases as they will be based on this special release.  I actually love this head so much I almost didn't share which LeLutka head I had fallen for, but it is my duty as a blogger to share with you what I discover in my journey along the grid, so with a little bit of grumbling I had to share. I have found out it doesn't matter if you wear the same head or not, how we dress, carry ourselves and the appliers we use change how even a mesh head looks.  If you have been thinking about checking them out for the first time then take some inspiration from me and Strawberry Singh and take a chance on mesh heads for your resolution this year.

I think this ensemble got me a bit fired up as well and got me feeling quite feisty with its flesh baring styling and curve hugging pants which I thought went perfectly with this gorgeous set of dramatic pearls from Indulge Temptation.  You can pick up both items at Swank which started yesterday, so hurry on over and get your hands on some fantastic designs before your friends do since they are probably all preoccupied with some of the larger events that just opened as well.

Great choice!!! I'm still waiting for something more similar to the personalized shape of my default head, but you got me looking :)