The perfect time of year to go get lost for a bit, but always have your escape route planned!

So my best friend might kill me for this post, but after wandering around on the grid yesterday and getting lost, I find myself thinking of her and her adventures into the wilderness alone.  Now, if you have ever had a chance to witness a conversation between the two of us, or if you have read about any of our adventures, then you know the two of us can get into some interesting predicaments together and when apart, hers have a tendency to get much more off the beaten path.  This past Sunday she set off, for the second time in the last couple of months, to tackle the largest loop on the San Francisco peaks which climbs several thousand feet in elevation, covers about 30 miles, which is kind of funny, when you think about the fact, she thought it was only 20.  But being Kelly, she of course sets off on these treks all by herself with very little food, plenty of water she rarely drinks and of course a couple pairs of socks (since we watched the snow fall on the top of the mountain the night before), her phone with navigation and her rather adventurous spirit.  Now I mentioned this was the second time, and I probably should say the socks were added after the first trip since she didn't expect to be in thigh high deep snow as she attempted to stay on trail, hopping log to log hoping she was heading in the correct direction, since the only other tracks that day had turned around and gone back several miles before the snow actually got deep on the backside of the mountain.  I remember the sound of her teeth chattering when she reached the 3/4 mark the first time she attempted the trail, and I told her to stay put so I could come and get her, since at least she was some place I could FIND her at this point.  Did I mention my boyfriend and I had been worrying about her for hours and trying to call since she was hours later than expected?  Needless to say, when she told us this past Saturday that she was going to hike the mountain, and finish it this time, we were a little doubtful, but they made plans to meet at the lower trail head so he could do the last 7 miles, as first calculated, with her and then come back to the house for a BBQ.  She happens to go up the mountain like a Billy Goat and sometimes skips or runs down the trails, so when it was starting to get later into the afternoon we began to wonder what had happened this time, and at first the jokes start to come, and then true worry starts to set in.  When my phone went off around 2:30pm with her saying "Hi," and I noticed it was actually sent a couple hours before I figured she had made it to where they were supposed to meet and we just hadn't gotten her message from the top of the mountain.  Then the text came in saying, "My knee went out, just got to the trail head."  So as she argued back and forth that she was "fine" I finished up what I was doing, texted the boyfriend, who responded with a simple "LOL" and headed off to get her hoping it was just a bit of a tweeked knee, not a major injury.  If she wasn't in as good of shape as she is, it probably would have been more of an issue, or if she hadn't had an exit plan.  So the moral to the story is this, go ahead and forge your path off into the wilderness but make sure you have an idea of how to get home, or at least a back up plan, like a best friend who happens to be ready to come get you no matter where you have run off to this time! 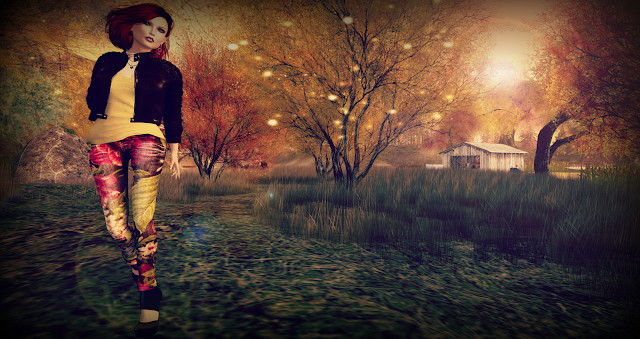 We are down to the last 4 days of the 4th Annual Rock Your Rack event benefiting the National Breast Cancer Foundation featuring tons of designers, fashion shows and music events with a portion of all proceeds going to help women in need get access to the much needed diagnostic tests and treatment for breast cancer.  Today I am showing off this absolutely fantastic ensemble from PRISM, exclusively available at the event.  The Ladonna outfit comes in a couple of different of colors with a HUD to change the t-shirt meaning you can create several different looks with one purchase, which means it just has to be added to your wardrobe before the event ends and you go back to feeling guilty about spending a few Lindens?!  Don't have to feel guilty when a portion of every purchase will go to benefit a great cause, so do yourself a favor and head on over to the event today, and for all the listings of shows and other exciting happenings during the event make sure to check out the website >HERE<!

Have a wonderfully wicked rest of your day and remember to always stay true to your style and make today's trends in fashion and home decor work for you!
~Jade~
Posted by Unknown